In January I decided to write a number of posts All About Me to allow my readers to learn a little more about who I am. For this latest post I have decided to answer 20 ‘this or that’ style questions as I felt it was a quicker, snappier way than more traditional questions. I hope you enjoy reading my answers! 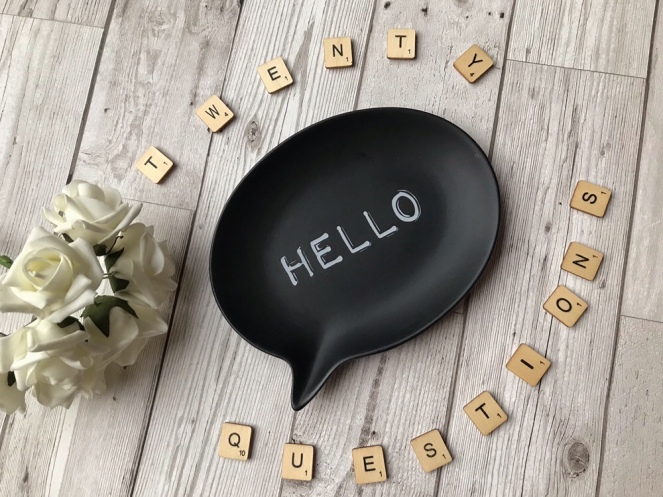 Has to be Tea! Growing up I couldn’t stand drinking either but in the last 5 years I have discovered a love for tea -one sugar and milk!

This is a hard one as I am a fan of both but I think my sweet tooth would have to win, who can resist a chocolate fudge cake?

Both! I really couldn’t choose between them as I often have both together with chips and on the occasional burger!

I love both Chinese and Italian food, however given the option I would probably go for Chinese as we don’t often have it. We all love pizza’s and pasta’s so have them on a regular basis at home meaning Chinese is reserved as more of a special treat.

This has to be the one of the hardest questions for me as I am passionate about both. If there is a movie based on a novel I always have to read the book first as I find movies often leave out big and often important sections of the storyline. Pushed to make a decision I would say reading a book would take preference over watching a movie if and when I have some me time.

Years ago I treated myself to a Kindle, (one of the originals that’s how long ago it was!), and for years I used it as my only reading source finding that books were often much cheaper to purchase as an Ebook. However in the last 18 months my passion for books has been rekindled following a trip to the local library. I had tried to fool myself for so long that reading on my Kindle was no different to reading a book, but I love the smell and feel of reading an actual book much more than reading from an electronic screen. The only downside to switching is that I have to have the light on when reading in bed now!

Mr F loves a good horror movie, but has to watch them when I’m out or in bed as I just don’t like them. In my youth (a long time ago!) I used to love watching them, but I just can’t hack them anymore give me a nice happy romantic film any day of the week!

You can’t beat a good bit of TV comedy in the evening as nice lighthearted easy watch, just what I need after a day running after the kids!

I have touched on briefly in previous posts that I suffer with anxiety and this has had a massive impact on every aspect of my life including something as simple as using the telephone. Whilst I would happily speak to people on the phone in the past my anxiety has meant that I feel much happier communicating via text. I don’t avoid calls altogether, however I am loathe to answer incoming calls unless absolutely necessary preferring to make calls in my own time when I feel ready to do so.

I never really used or I stood Twitter until I started blogging, but it has since become my favourite social media channel- I just feel it’s much quicker moving and current in comparison to Facebook.

I can’t sing for toffee! In fact I probably can’t dance either, but in order to save everyone’s ears I would opt to dance first and foremost and reserve singing for when I’m alone in the car!

I shower everyday for speed purposes, but given the choice a nice long soak in a bubble bath would always win – since having children a bath is now considered a luxury especially if it is uninterrupted !

Despite living in Cumbria which is renowned as a rural area of countryside I am definitely a towny. I need to be close by to the amenities (shops!) and having stayed in the middle of the nowhere before I can confidently say I couldn’t stand the silence or the pitch black that descends at night due to the lack of streetlights!

Growing up our family always had dogs, but when I moved out and lived on my own I became a cat owner and there was no going back. My cats were both so cuddly and I adored how they would come and sit on my lap whilst I watched TV purring with contentment. Our only pet now is a Guinea Pig, but I would definitely love to be a cat owner again in the future.

I’m not a morning person despite being a Mum for nearly 15yrs my early bird mode has failed to deploy! I struggle to get going in the mornings and am at my most productive in the evening .

Much to the horror of my eldest I am usually fashionably early, to a teenager this is like the crime of the century! I don’t like being late to anything and have always been that way as my Mum was the same. I must hold my hands up though and say since the arrival of the little one I am occasionally running late – even after 4yrs – it’s can just be such a struggle to get everyone ready and out on time especially with an image conscious teenager in tow!

I only wear skirts or dresses when needs really must, usually to wedding’s or other formal occasions where I don’t have much choice! I am really self conscious as I naturally have one calf that is significantly bigger than the other so I prefer to hide it under my trousers.

When I was pregnant with my youngest I developed a bad back which at the time was put down to normal pregnancy problems (SPD), however it was discovered many months later when there had been no improvement that I had actually slipped a number of discs. Since then I really struggle to wear any type of heel, even the smallest, so it’s sadly flats for me now. I used wear heels all of the time from being a teen so it’s been quite a big adjustment.

Thanks for reading! What are your preferences? Feel free to share some of yours in the comments I would love to read them.