How can the purchase of one small (overpriced) Kinder Egg be my starting point for a whole blog I hear you ask – well allow me to explain….. 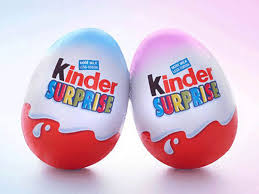 My son has always been (how can I put it), adverse to the whole hairdressers experience despite having taken him since he was fairly young, let him watch Daddy in the hot seat plus purchased a number of books all about the experience. It has always felt rather like a battle of wills between us and him to try and get his wild mop of hair under control! I therefore have to confess that the only way we manage to achieve any kind of barber shop success is using every parent’s favourite – bribery. This for us means that if he sits and lets the ‘nice man’ cut his hair he is allowed the visit the shop along the road to purchase the holy grail of treats – a Kinder Egg.

A few months ago however this experience for me was tainted somewhat by a remark made by the cashier to my son at the till. I’m not entirely sure when they changed as in my youth all Kinder Eggs came in a ‘one size fits all’, but Kinder in their wisdom now offer two colours of eggs – pink and blue. Whenever he gets the opportunity to choose one Leo has always chosen the pink egg – on this occasion it was because of the Frozen toys advertised on the outside and let’s face it the boy has great taste I LOVE Frozen too!

Excited and not quite believing his luck he trotted on up to the till and explained to the lady he was getting a treat for having his haircut and all was going well until the cashier informed him the “Blue ones are for boys”. Now luckily for her my son either didn’t hear or frankly couldn’t give a toss as he just wanted to get to the car and eat his egg, but I was stunned into silence not sure what exactly to say back to her so paid and left.

I drove home shocked that someone would say something so small minded to a child of three years old which could have really knocked his confidence. Surely I can’t be alone in thinking that chocolate and a toy in a yellow plastic egg is the same regardless of the gender stereotypes Kinder have decided to plaster on the packaging – in fact we have had a pink egg which has in fact contained a car before instead of the advertised toy and he was equally as happy as I’m sure a little girls would have been.

It got me thinking about toys in general and how boys are usually earmarked as playing with car, Lorries, trucks and superheroes with girls playing with dolls, kitchens and princesses. However it is usually only boys that receive negative comments when playing with toys that are supposedly for ‘girls’. I have two older girls in their teens and when they were younger they played with a wide range of toys including cars which were actually one of their favourite things to play with and I allowed them freedom of choice when it came to making choices. Now when I had my son four years ago I never once contemplated allowing him anything other than the same opportunity of choice that his sisters had.

When given the opportunity either with pocket money or as a treat to choose a toy I have noticed that he is always drawn to the ‘girls’ toys first and foremost and I actually think this is down to how dull the ‘boys’ toys look in comparison – have a look the next time you are in a toy shop or supermarket as the majority of ‘boys’ toys are dark in colour whereas the ‘girls’ toys are brightly coloured and in my eyes a damn sight more appealing at first glance. In fact his most recent purchase with his birthday money was a pink dolls house which he adores and plays with every day without fail.

I am more than happy for my son to play with dolls especially as at some point in his life he will hopefully have the opportunity to become a Father and I would hate for a stereotype learnt at a young age to mean that he believes that the day to day care of a child is the sole responsibility of the Mother. Likewise, so what if my son wants to dress as a princess with a crown? It is role play and children should be allowed to be free to play and discover for themselves using any resources available to them without judgement.

Now I am in no way suggesting that all toys be made plain in colour or that they all be made gender neutral even, just that people realise that letting your son play with dolls or your daughter play with cars isn’t going to have an effect on their development or future life choices. In fact I feel that having a wider range of choices of toy as a child will help them to become a more rounded individual.