There’s nothing better over the festive period than going to see a show or Panto with the family to get into the mood, however with Leo having only just turned four I was reluctant to book our local regional pantomime as I know from experience that it is rather long-winded! I was therefore delighted when back in October I saw a local Community Theatre advertising the children’s show Santa’s Christmas Wish, designed especially with kids aged 2-7 in mind. 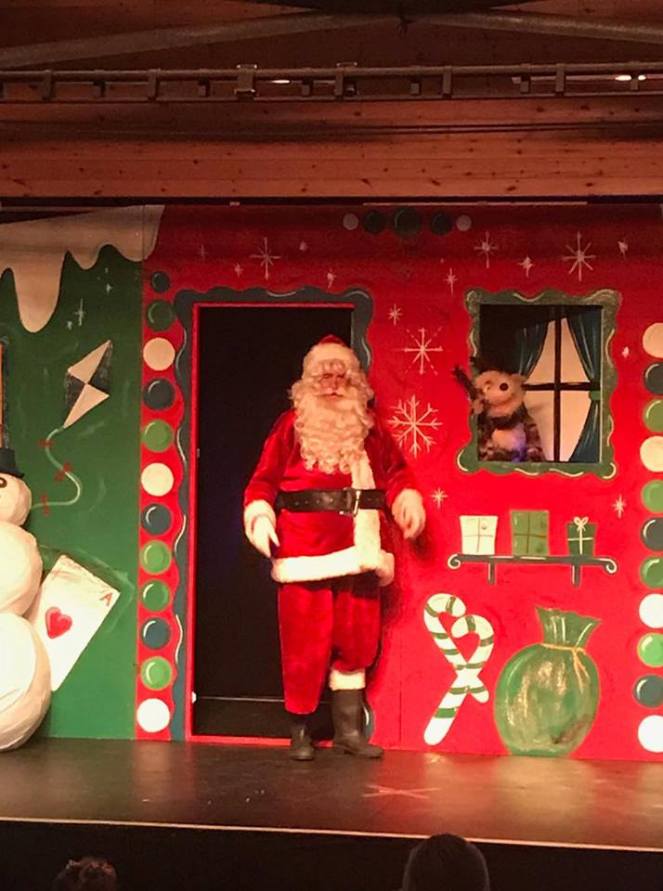 The Santas Shows were created by Martin Parson’s and the team who are behind Marty MacDonald’s Farm which features Justin Fletcher’s voice as Pongo The Pig – AKA Mr Tumble. With a wealth of experience behind them including work on other children’s favourites like Playdays and Tweenies I had high expectations. They have created a number of different shows each starring different characters and storylines which have been performed all over the UK throughout December.. 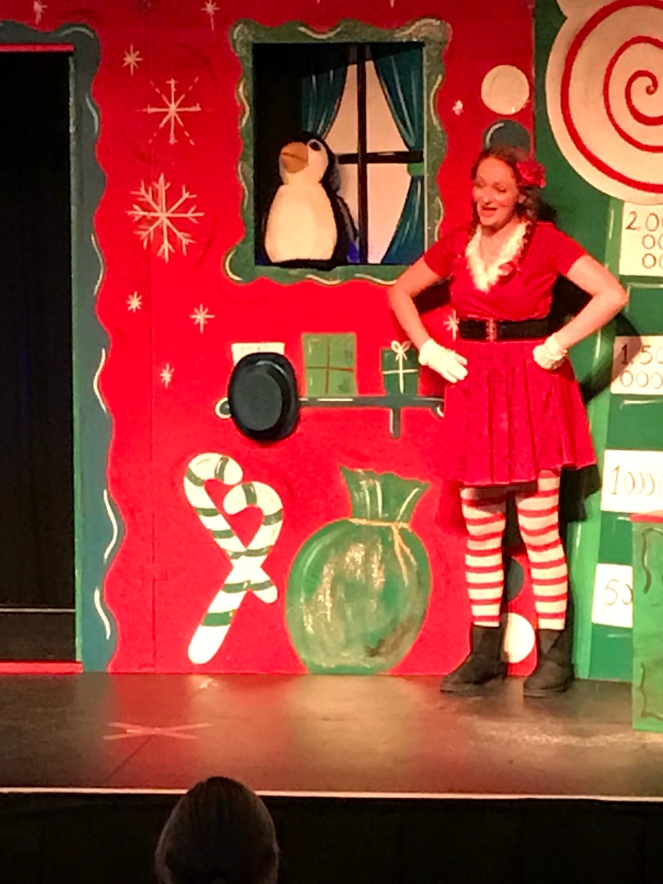 Based at the North Pole Santa’s Christmas Wish was performed by a cast of only two actors, Mrs Holly Claus and of course Santa Claus. They were also joined on stage for short bursts by their ‘puppet’ friends Pom Pom the Penguin and Dasher the Reindeer who helped to move the story along with their suggestions of what Santa’s Christmas Wish may be. 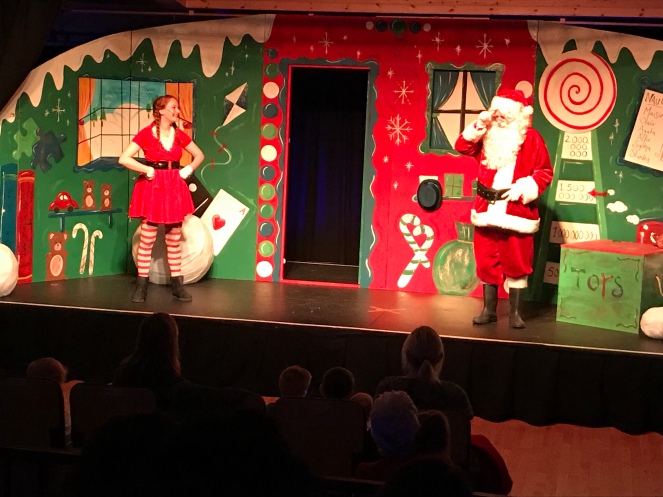 From the start it was clear the show was going to be an interactive, sing-a-long and fun filled event – just perfect for young kids who’s idea of torture is being made to sit quietly on their chair. The children were encouraged to shout out their names and suggestions as well as join in with a whole host of festive songs-complete with actions- and many of them even headed down to the front to dance along too. 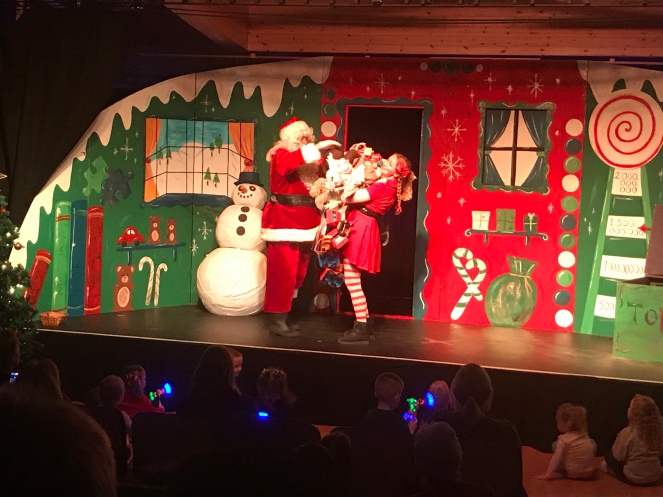 Leo loved singing along especially as he knew the majority of the songs – us grown ups and Thing 2 also enjoyed a good sing and bop along too if the truth be told. Our favourite though was definitely their rendition of the 12 days of Christmas which gave everyone in the theatre a good chuckle. 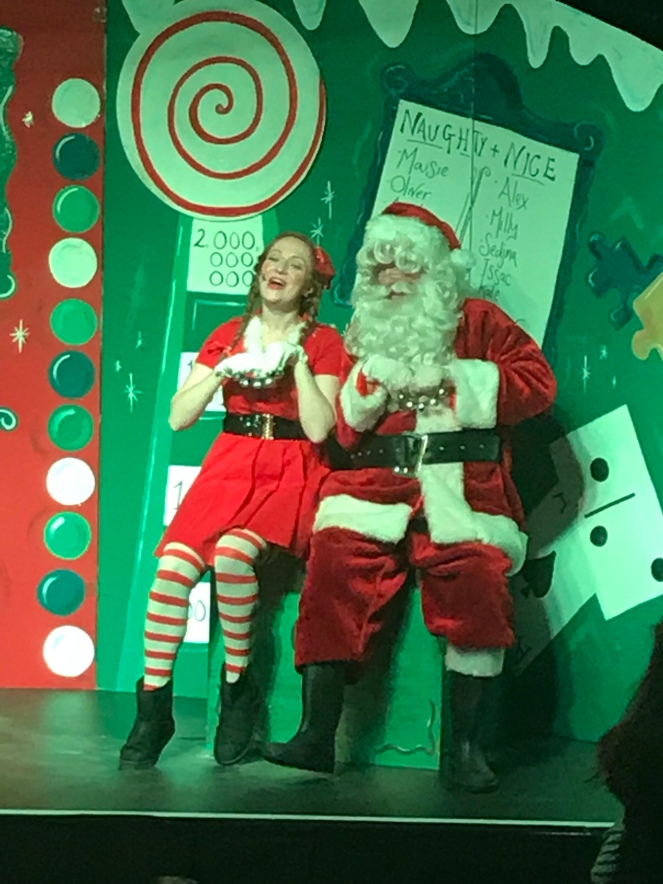 Unlike the long drawn out panto’s I remember from when the girls were younger the show lasted approx 40 minutes – which was actually a perfectly pitched timescale as most of the kids were becoming a little wriggly by that stage. However there was one extra surprise for all the boys and girls when Santa came out into the theatre and they all had the opportunity to meet the man himself and receive a present! Whilst waiting Leo got to speak to Mrs Claus and remind her that it’s a racing car that he has on his list before he got his turn – she assured him she would remember and remind Santa!

We all throughly enjoyed the show and came home feeling really very festive indeed and (even more) excited about Christmas! The tickets were really reasonably priced and well worth the experience the children received. I really hope The Santa Shows will be returning to our local area next year as I wouldn’t hesitate to purchase tickets. 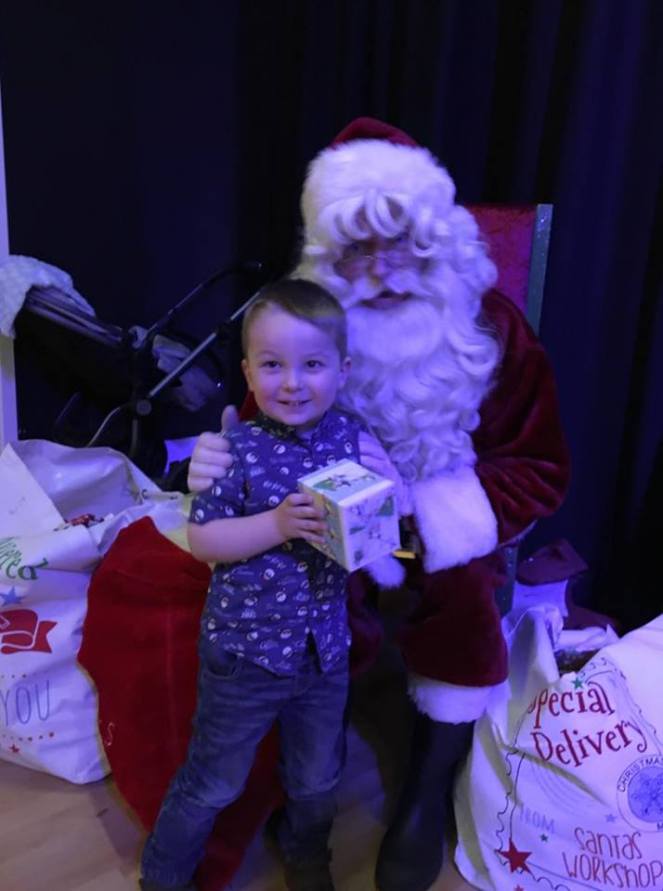 Click here to find out more about The Santa Shows

One thought on “Santa’s Christmas Wish”