Towards the end of last year I realised just how overwhelming my TBR pile had actually become and made a resolution to work my way through it by planning posts for the first few months of 2019. So far so good and my pile is starting to (slowly) decrease! Today’s review is a book which I received ages ago and I can only offer my most sincere apologies to author Ericka for how long it has taken me to read and post. So, without wasting any more time, here is my review of Super Nova by Ericka Waller.

1997 – somewhere dull on the outskirts of London, (think middle-class home counties dull as dishwater suburbia). School oddities, April, Jamie and Tom, are trying to work out how to be 15.

April is battling anxiety, is obsessed with Sylvia Plath and has a crush on Tom.
Tom’s dad died 18 months ago. His mum has turned into a ghost and his little sister has become his big responsibility. His life is held together by secrets and Britpop, and oh yeah – Tom is in love with April.

Jamie is angry, and she wants everyone to know it. There’s more to her story, but Jamie won’t tell.
Yuki, Tom’s weird neighbour thinks he has life sorted and imparts his pearls of wisdom by channelling Jim Morrison, leather trousers and all.

Four friends, one year. Sex, drugs, rock n’ roll. What can possibly go wrong?
If you’ve ever felt overwhelmed, anxious, or out of your depth, if the four right chords can make you cry, this is the book for you. 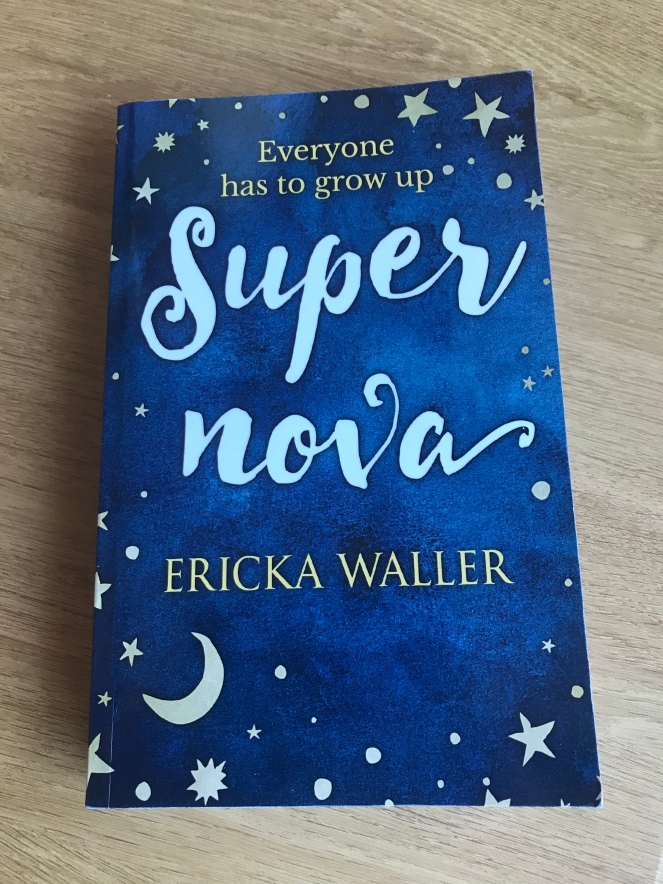 April spends the majority of her time battling the voice inside her head that insists she make herself familiar with the exits in every situation. For April school is a constant inner-battle which leaves her feeling confused, exhausted and alien to her peers. Her only saviours are best friends Jamie and Tom, whom she clings to like buoys in the uncertain seas of teenage life.

Tom is still grieving for his Dad whilst trying to negotiate school work and teenage hormones with the added responsibility of holding his family together for the sake of his sister. With the pressure of his secret double life as a teenager combined with the life of an ‘adult’, which has been thrust upon him, Tom’s only light relief is the time spent with his friends- most importantly his crush April.

Jamie is the outspoken one in the group, but at home she is confined to a life of rules and regulations about who she is allowed to be. Struggling to discover her identity and who she really is in such a conflicting atmosphere means Jamie spends a lot of her time lashing out in anger at the world.

Despite their contrasting situations the three friends find comfort in each other’s company and together they try to wade through the worries of teenage life to discover who they really are.

This story is set in the 90’s which is the era I lived through my teenage years and the angst and struggle these characters endure is so relatable – as well as the music! Just reading their story transported me straight back to my school years where it seemed to matter so much about fitting in with the right people, all the while searching to discover your true identity. Teenage years are some of the toughest and this book describes the feeling and thoughts of all the characters so realistically. I also really enjoyed the alternating narrative between Tom and April as it allowed me a really in-depth insight into their thoughts and feelings as well as their individual situations.

The main reason I agreed to read this book was the issues of mental health that are discussed. April suffers with anxiety and as I suffer with GAD and my teenage daughter also has anxiety, I was intrigued to see how Ericka used this in the book. I have to say the descriptions of April’s feelings, both physically and emotionally are so real I could have written them myself. It wasn’t until I read the afterword, I discovered that Ericka herself suffers with anxiety and she has obviously drawn on her own personal experiences in order to write such truthful accounts.

I have read other books that have touched upon anxiety in the past and the difference with Super Nova is that we are privy to April being offered advice and information about how to get help. The narrative also helps normalise the feelings of anxiety for the reader and take away the stigma often attached to mental health and for the target audience of Young Adults this is such an important message.

Another very important message to be taken away from this book is that people aren’t always as happy and content as their facade would have you believe. All the characters in this novel are struggling and battling their own demons behind closed doors which highlights the importance of taking the time to be kind to everyone as you never know what is going on in their life. Ultimately for its readers Super Nova offers the encouragement to open up to those closest to you if you are struggling as they are there to help without judgement.

Despite not being my usual genre and me not being in the target age group for this book I thoroughly enjoyed reading it. Ericka has dealt with several serious issues alongside the everyday teenage worries in such a relatable, sensitive way. I highly recommend this book to teens and adults alike as the messages are equally pertinent to both age groups.

Ericka Waller is a wife and mum to three small children (age not size; she is a wife to her husband, not the kids).

Once, BC (before children, not Christ), she worked in PR and currently has a weekly column in The Argus, A Fresh View . Her blog, Mum In The South, describes her life as a mother and occasional person in her own right. Her blog won the Brits Mum s Brilliance in Blogging Award in 2013.

When not writing or wrestling with her children and/or husband, she can be found walking the dog, bidding for retro furniture on eBay or hiding in the bath with a book.
Supernova is Ericka s second book, the first Confessions of a Mother Inferior released in 2015, was an instant hit with readers and was compared by Amazon as the spiritual follow-up to Bridget Jones.

Super Nova is available to purchase from Amazon**

*We were gifted a copy of this book in return for an honest review. All thoughts and opinions are our own.