If you are a regular Fraser’s Fun House reader you will know just how passionate I am about books! Despite wanting to fill my home floor to ceiling with every new release I’m not sure my family would appreciate it! Instead, today I’m thrilled to be telling you all about brand new Children’s book release, Dad Droid*

plus one lucky reader will WIN their very own SIGNED COPY!!!

Pitched at ages 8-12 years this new title sounds perfect for little bookworms everywhere, so check out all the must-know info and find out how to enter for your chance to WIN!!

Freddy Bird lives with his eccentric father Bert,a genius inventor who has filled their house with his extraordinary gadgets. But Freddy is embarrassed by his unusual Dad and just wants to have a normal life and family.

Bert works for powerful reclusive businessman C.G. Wortnall, developing new products in the forbidding factory on the hill, which over looks their hometown. Although Bert is only interested in creating ever-more-astounding inventions, Wortnall’s clever gizmos are gradually taking away people’s jobs by automating the town, starting with the local hairdressers, who now roam the streets,out-of-work, following the incredible popularity of Wortnall’s Hair-raiser, a helmet-like contraption which styles hair in seven seconds.

When Bert goes missing in dramatic and mysterious circumstances, Freddy and best friend Minnie find themselves plunged into mortal danger. But after they discover a secret tunnel where Freddy’s father has hidden parts of an amazing robot, they decide to outwit their enemies by putting the droid together-a droid that looks just like Freddy’s Dad.

Their roles reversed,Freddy sets out like a parent to train the robot into being just like his father. However,pursued by dangerous thugs, deadly mechanical birds and a sinister shark-like car, the children and Dad Droid are forced to go on the run, giving Freddy the opportunity to try and find out what’s really happened to his Dad.

Chris and Justin are best known for creating, writing and starring in the Sky Atlantic comedy series, This is Jinsy. With two seasons airing on Sky Atlantic, the show was nominated for a prestigious British Comedy Award, an International Rose d’Or and received critical acclaim throughout the British press. 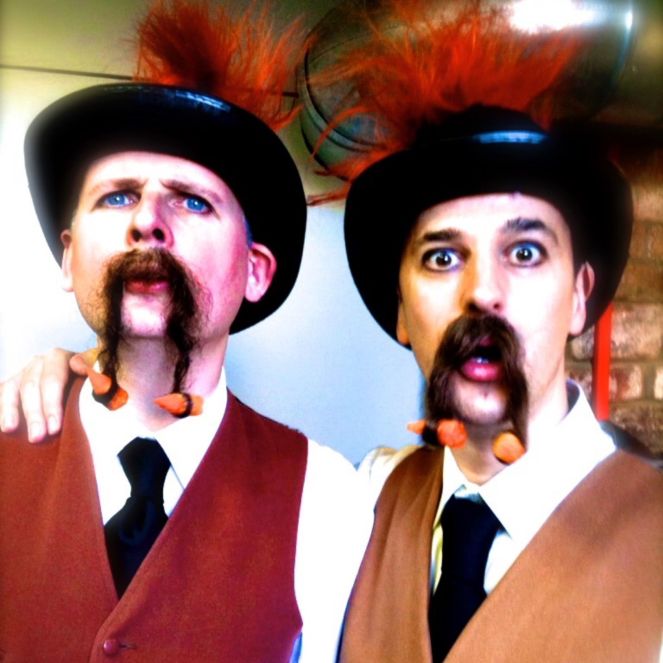 Since This is Jinsy, Chris and Justin have piloted a comedy for Channel 4, written a comedy-thriller for Rob Brydon and adapted the cult classic novel The Book of Ebenezer Le Page–an extraordinary Dickensian saga set over a hundred years on their home island of Guernsey-for Route 24, a production company affiliated to ITV.

As well as releasing two albums containing all their self-penned songs from This is Jinsy, they have just released an album of new material called ‘Tvignest’

To be in with a chance of winning a SIGNED copy of Dad Droid by Chris Bran & Justin Chubb simply follow Fraser’s Fun House on Twitter  and RT our pinned post. Entries close at 10pm on 14th June 2019. GOOD LUCK!!!