Last Christmas we had the pleasure of being invited to a special screening of The Snowman produced by Carrot Productions which can only be described as magical. Therefore, when we were asked along our local theatre to see their brand new show for 2019 featuring one of our favourite duo’s Wallace & Gromit, we were thrilled and have been on countdown for months! We have always had a soft spot for Wallace & Gromit with their animated capers being one of the first things circled in the Christmas Radio Times as essential festive viewing!

For this new show Carrot Productions have teamed up with Academy Award Winning Aardman Studio to create a specially commissioned new animation aptly named Concerto In Ee Lad! During it’s 38 day stint the tour has travelled across the UK taking along with it the wonderfully talented Picture House Orchestra which is made up of a vast number of professional musicians who regularly play with well-renowned orchestras including the BBC Philharmonic, Royal Liverpool Philharmonic and BBC Symphony. Promising to be fun for the whole family and a great way to introduce the youngest members of the clan to the joy that is a live orchestra we couldn’t wait to take our seats for this highly anticipated show! 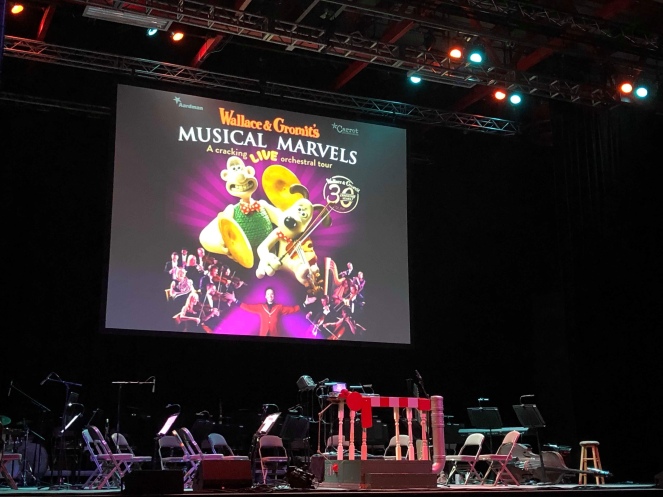 The show itself was divided into two halves of around 35-40 minutes long with a 20 minute interval which was perfectly pitched for the audience as some of the children near us were certainly starting to get a little fidgety towards the end of the first half!

The show was compared by internationally renowned classical musician, actor and director Matthew Sharp, who began the show on the giant screen having just woken from a nap and realising he was late for the show. Cue lots of running down seemingly endless corridors before he finally arrived in the theatre running down the steps and leaping onto the stage – what an entrance!

From there he took us along on an interactive journey with him and maestro Wallace who was backstage making last minute preparations for the debut of his new Concerto. Of course being Wallace things don’t always go to plan and he needs a little help from his trusty sidekick Gromit too. Slightly eccentric (in a good way) Matthew’s interactions with both Wallace and the audience kept the show flowing beautifully and gave plenty of giggles along the way too – I can’t think of anyone more suited to the role in fact.

The orchestra played an array of stunning pieces during the first half helping Matthew tell the story of the newly created tale which had the whole audience enraptured, in fact I’m sure you could have heard a pin drop had you tried! My personal favourite though was the full length rendition of Bohemian Rhapsody which saw Matthew pick up his own cello, joining in with a wonderful solo as well as showcasing his amazing vocal talent, it was truly breathtaking.

Also during the first half we met the entire orchestra section by section when Matthew took us on a tour using a video camera. Not only a great way of introducing everyone to the different instruments that make up an orchestra, it also allowed the audience to see up close the wonderful Wallace & Gromit inspired costumes they had all donned for the occasion. Throughout the show is was lovely to see the fun and  personalities of the musicians shining from the stage which helped give the performance that all important added element of entertainment and character.

After a short interval to allow everyone to visit the loo and stock up on some much needed sugary snacks we settled down to a screening of The Wrong Trousers, my absolute favourite of all the animations. Accompanied by the live orchestra we were drawn into the animation with the music giving it an extra edge, making us sit even further forward on our seats in suspense. All of the way through I kept having to shake myself as the realisation that the sounds and music were actually being played live dawned on me and I spent a majority of the time in utter awe at the orchestras talent.

Whilst aimed primarily at families I would have happily have gone along with just the hubby or even a group of friends as there was something for everyone including a few jokes that went over the kids heads. We had an amazing time at the show, which kept us entertained throughout and left us all with huge smiles despite the torrential rain that greeted us in the car park! We give Musical Marvels a gigantic two thumbs up !

There’s still a few more shows in the Musical Marvels Tour and you can get 20% OFF using code WANDG20 when booking via the Carrot Productions Website. You can also book tickets for this year’s festive production of The Snowman at various venues across the UK.

*We were gifted a family ticket for the show in return for an honest review. All thoughts and opinions are our own.