Today I’m thrilled to be taking part in the Blog Tour for Come Back For Me, the newly released thriller from Heidi Perks. Many thanks to Rachel Kennedy and Penguin Random House for sending me a copy for review. I’ve been so excited to share my thoughts with you all and hope you enjoy my review.

A SHOCKING DISCOVERY.
A COMMUNITY WRAPPED IN SECRETS.

A tiny island community is stunned by the discovery of a long-buried body.

For Stella Harvey the news is doubly shocking. The body has been found in the garden of her childhood home – the home her family fled without explanation twenty-five years ago.

Now, questioning her past and desperate to unearth the truth, Stella returns to the isolated island. But she quickly finds that the community she left isn’t as welcoming as she remembers – and that people in it will go to any length to protect their secrets.

One thing rings true…
You can’t bury the truth forever.

Stella grew up on the idyllic, remote island of Evergreen with her family and has many cherished memories of her carefree childhood before their sudden departure. Having known nothing but the loving, close-knit community of Evergreen until the age of eleven when her family fled under the cover of darkness during a dangerous storm, Stella has always harboured a host of questions about why, always looking back on her time there with rose-tinted glasses.

That is until an all too familiar house appears on the news 20yrs later after the discovery of a body buried on the edge of woods at the bottom of her old garden. The home that has occupied her memories for as long as she can remember is suddenly thrust into the spotlight and Stella finds herself compelled to return to the place, she once called home. To say the welcome, she receives is lacking is somewhat of an understatement, but she needs answers and like a dog with a bone she isn’t prepared to stop until she has them – the question is will she like what she finds?

From the very first page of this book Perks had me utterly hooked and unable to put it down, even when the kids were summoning me! The story alternates between the past, back in 1993 when Stella and her family left the Island and the present day. As a reader we are privy to the differing perspectives and experiences of Stella as a both a child and an adult which not only allow us to pick up subtle clues about the mystery along the way, but also to see how events can be misconstrued even by the same character.

Perks has a wonderful easy writing style but doesn’t lack the detail and descriptive world building required to make a story of this kind shine. I particularly enjoyed the descriptions of Evergreen which gave it an atmospheric, sinister feel which helped add to the overall thrill and suspense. The characters were also fantastically written as she has given each and every one a real multifaceted quality which left me unable to decipher who could be trusted. 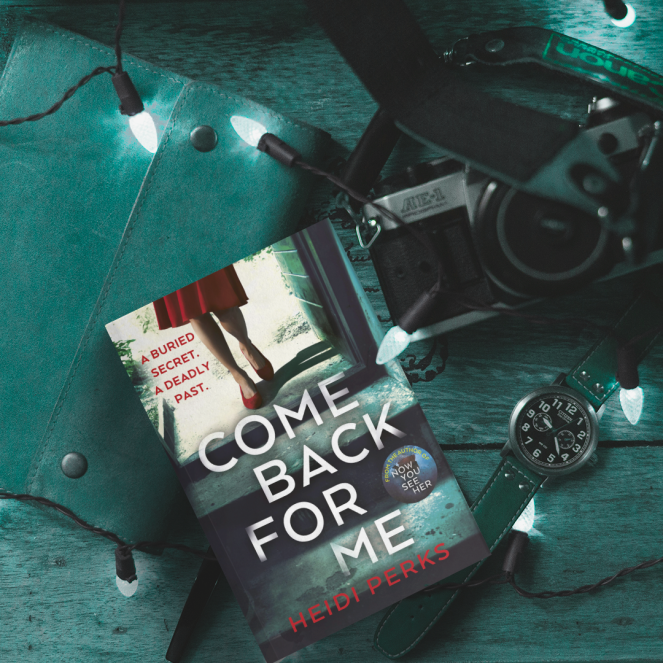 Come Back For Me is an amazing fast-paced, compelling read full of secrets and lies that kept me guessing until the very end, surprising even me who is the master of working out ‘who dunnit’! Even with an ever-growing list of clues and suspects this tale kept throwing unexpected plot twists my way, leaving me shocked at its dramatic finale – the sign of a truly epic read for me!

This is the first book I have read by Heidi Perks but I’ve already added her previous offering to my TBR list and will be eagerly awaiting her next release as this book is one of my favourite reads of 2019 to date. If you are looking for something new to get your teeth into, I highly recommend this roller coaster read.

twice reached the Sunday Times Bestseller list, first in hardback in July 2018 at No.9 and again at No.6 in paperback in March 2019 where it was a Richard & Judy Book Club pick for Spring 2019. Now You See Her has sold over 120,000 copies across formats to date and has received a staggering 200 five star reviews on Amazon* from readers. It has also been optioned for TV from the production company behind BBC One’s ‘The Miniaturist’ and Channel 4’s ‘National Treasure’.

Heidi Perks worked as a marketing director for a financial company before leaving to become a full-time Mother and writer. She is graduate of the inaugural Curtis Brown Creative Online Novel Writing Course (the only creative writing school run by a literary agency).

Come Back For Me is available to purchase from Amazon*

**We were gifted a copy of this book in return for an honest review. All thoughts and opinions are our own.