The latter part of this year has been a tough one for me on a personal level as I have been caring for my husband who has been ill. As a result I have had to refuse a lot of review requests for books as I couldn’t commit to a date for reading, but the wonderful Liz McGivern was so understanding and still sent me her book telling me to read it when I could. I am so happy that she valued my opinion of her writing to offer me the opportunity, especially as I absolutely adored her Amy Cole Trilogy.

So, as you might of guessed already I have read her newest release Finding Juliet and today I’m sharing my thoughts.

Relationships are complicated. For James Rodgers they’ve managed to enter a whole new level of complexity with the appearance of his ex-girlfriend, Juliet.

With over a decade of making up to do, it’s going to be a tough sell that he’s a changed man and deserves a second chance.

There’s one other problem: she may or may not be a ghost.

Straight-talking Juliet has not been lucky in love and now she’s unexpectedly faced with her hapless ex-boyfriend. Time hasn’t healed her wounds but the universe has other plans and has thrown them back together, whether they’re happy about it or not.

They need to push aside their differences, face their past and work together in order to find out if they’ve been given a second chance at love before it’s too late.

Relationships are complicated; but this one is really a matter of life or death. 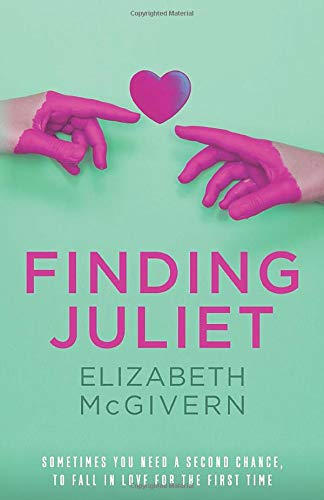 James’ life is frankly a mess. Separated and with a divorce looming he’s living (if you can call it that) in a soulless flat surrounded by unpacked boxes and limping from one chaotic day to the next. Despite his recent split with Kate it’s another woman who fills his mind as he finds himself harking back to his relationship with ex Juliet that ended over fifteen years ago.

Haunted by the memories of their time together and losing sleep James finds himself drowning his sorrows in a nightly drink or two and it’s after one such session that he finds himself knocked unconscious. Coming round he realises he may have actually done himself some damage as he awakes faced with a rather angry illusion in the form of Juliet. However when a quick scan reveals he is in good health he has to face up to the possibility that he isn’t imaging this new companion, but why is she back now and why do the pair appear to be inextricably linked?

Finding Juliet is a beautifully written emotional story about secrets, lies, reflection and moving forward. As with her other books Liz has done a absolutely wonderful job of meshing emotion and sadness with laugh out loud moments to create a truly fabulous story. The writing style is so easy to read and perfectly pitched in terms of content to keep me turning the pages – I actually finished it in a day as I couldn’t bare to put it down.

The book is written using the alternating perspectives of James and Juliet which gave the story not only a lovely flow, but also offered me as the reader a rounded insight into the main characters psyche. All of the character’s were portrayed in a refreshingly realistic way and in particular I found I could really relate to Juliet; I loved her witty remarks and she came across as a bit of a badass despite her vulnerability.

Despite being completely different to her Amy Cole series Liz has nothing to fear with this switch up as for me Finding Juliet is a triumphant success. Being a spiritual person myself I loved seeing that aspect used to create this unconventional rom-com tale. However for those that aren’t don’t be dissuaded from picking this book up, you may just need to suspend belief for a few hours, but lets face it that’s what reading is all about! A fantastic read that will have you laughing and crying in equal measure, just make sure you have a tissue to hand! I can’t wait to see what Elizabeth McGivern has lined up next…..

In an effort to keep her sanity she decided to write a parenting blog after the birth of her first son so she can pinpoint the exact moment she failed as a mother.

In an unexpected turn of events, the blog helped her to find a voice and connect with parents in similar situations; namely those who were struggling with mental health issues and parenting. It was because of this encouragement – and wanting to avoid her children as much as possible – her debut novel, Amy Cole has lost her mind, was born.

Elizabeth lives in Northern Ireland although wishes she could relocate to Iceland on a daily basis.

Finding Juliet is available to purchase now from Amazon*

**We were gifted an e-copy of this book in return for an honest review. All thoughts and opinions are our own.