Recently I have been binge reading psychological thrillers and absolutely loving them! I read across most genres but sometimes there’s nothing better than reading what you fancy and that’s certainly been the case with me lately. My most recent thriller read  is the latest book from Suzy K Quinn, Not My Daughter, for which I’m thrilled to be participating in the blog tour for. Thanks to HQ Stories for having me on this tour alongside some amazing bloggers.

I told my daughter a terrible lie…

Lorna never told her sixteen-year-old daughter the chilling truth about her real father. But one morning, she finds Liberty missing — and realises the teenager has left to find the man she once fled from… 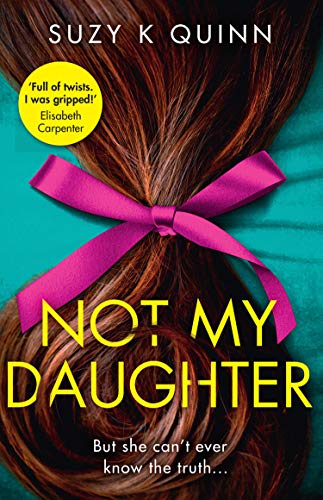 It’s been sixteen years since Lorna fled with nothing but a baby clutched to her chest and she has spent every second since finding ways to protect  and keep her daughter safe.

After a life spent living in a remote home behind huge fences, both literal and metaphorical, Liberty has had enough of being wrapped in cotton wool by her Mother. She is old enough to know the truth about her Father and not just the warnings and scare tactics she has been fed by her Mum. With the knowledge of who her father is and where to find him Liberty is determined this time she will discover what really happened all those years ago and no one can stop her.

Lorna knows that nothing good can come of a reunion between her daughter and birth Father Michael the famous rock and roll superstar, but when she wakes to discover Liberty missing she knows exactly where to find her. With control taken from her Lorna finds herself frantically drawn back onto a world she thought she had left behind long ago and she knows she will finally have to face her demons in order to save her daughter. But will it be too late to save Liberty?

Not My Daughter is an atmospheric psychological thriller that had me on the edge of my seat throughout. Quinn has an amazing ability to draw the reader into the heart of her story and I found myself so invested in the dual stories of Lorna & Michael, continually changing my mind about who was telling Liberty the truth! This book had some amazing plot twists, but I genuinely didn’t see where the ending took us – no spoilers, but oh my goodness what a finale!

The main characters are richly written with layer upon layer being revealed as the story progressed. I really felt I got to know both Lorna & Michael’s past and their relationship really well, although it becomes clear that their recollections of the same events are often skewed with reality adding to the suspense and intrigue.

I absolutely loved Not My Daughter, it’s one of the best and most surprising thrillers I’ve read in a long time. It has a strong, unique story line that offers something different to those same old predictable thrillers that are regularly churned out. It is a fast paced, entertaining page turner that kept me guessing throughout, the perfect thrilling read! Highly recommended !

This book deals with some really hard hitting and sensitive topics including Domestic Violence, Abuse, Rape and Sexual Assault so please be aware of this if you are interested in this title.

Suzy K Quinn is a British fiction author, and writes in three different genres: psychological thriller, comedy and romance. She was first published by Hachette in 2010 with her debut novel Glass Geishas (now Night Girls), then self-published a romance series, the Ivy Lessons, which became an international bestseller and a #1 Kindle romance bestseller in the US and UK.

After her second daughter was born in 2013, she self-published the Bad Mother’s Diary series, which also went on to become a #1 Kindle romantic comedy bestseller.

Suzy K Quinn’s novels have been translated into 7 languages and her books have sold over ¾ million copies worldwide.

Suzy lives in Wivenhoe, Essex, with her husband Demi and two daughters, and travels to Mexico every year to write and study Mayan story telling.

Suzy loves her family, friends and readers, but when pushed to add more to the list, she also loves travelling, food and alcohol.

Not My Daughter is available to purchase now from Amazon*

One thought on “Blog Tour: Not My Daughter By Suzy K Quinn”