Having been a massive McFly fan for many years and my favourite of the boys being Tom Fletcher it’s not surprising that I have eagerly followed his leap into writing children’s literature, sharing some of his stories with my youngest. I have also followed his wife Giovanna’s progression as an author and immediately fell in love with her writing style, devouring every new book as soon as they are released. I couldn’t then believe my eyes when I read that the pair planned to team up and release a trilogy of dystopian Young Adult books! It seems that it wasn’t just me that was excited and the release of Eve Of Man quickly became one of the most eagerly awaited releases to date this year.

Released at the end of May I asked my wonderful sister if she would pre order it for my Birthday and the wait for delivery seemed unbearably long – I may have kept texting her to ask if it had been despatched yet! Eventually the day dawned and when the postie knocked on the door for once I knew exactly what was inside the package and I couldn’t wait to get started!

Except that the fate of the entire world lies on her shoulders.

She’s the answer to their prayers.

Which means she has one function alone . . .

At sixteen, Eve must face her destiny and make a choice.

She will choose a man, one out of three carefully selected suitors.

But what about Bram?

The future of the planet hangs on Eve making the right choice.

COULD YOU CHOOSE BETWEEN LOVE, AND THE FUTURE OF THE HUMAN RACE?

When Eve became the first female born in fifty years she was hailed a saviour and for her protection whisked away to a specially built tower to keep her from harm as the future of the human race depended on her.

Eve has spent her whole life in the dome at the very top of the tower where she has experienced the best life has to offer in her perfectly balanced and utopic world. Cared for by a group of elderly women called ‘Mothers’, after her own Mother tragically passed away giving birth, Eve knows nothing of the outside world except that she is expected to save it.

The outside world is a shell of it’s former self. Fifty years of male dominance has led to severe destruction and the world we know has become unstable – the Earth is at breaking point. Climate change has caused widespread flooding and regular storms which have destroyed the city of London, now known as Central. The few remaining women living outside the tower must hide away in specially created sanctuaries to ensure their safety. Life as we know it no longer exists.

We meet Eve as she approaches her all important 16th Birthday when she is to be presented with three specially selected male potentials for her to connect with in the hope of procreation. When these meetings don’t go quite as planned things begin to change for Eve and the realisation of what she is expected to do begins to dawn on her. Along with this comes the discovery that her perfect life isn’t quite what it seems and that those she trusted may not have her best interests at heart.

Bram is the son of Dr Issac Wells, technological expert and creator of many of the systems that are in place within the tower to keep Eve safe. As a boy Bram was taken from his Mother to live in the tower and became the guinea pig for one of Dr Wells most important creations – Holly. Holly is the computer generated ‘friend’ created to not only keep Eve company but to be used as a tool for extracting information and ensuring compliance. Holly is piloted by three different young men with Bram being the longest serving.

Bram has grown up with Eve having spent many hours as her companion Holly and he feels they have a real connection. Eve can easily tell the difference between the three pilots not only by their eyes but also their personalities and Bram’s ‘Holly’ has always been her favourite. A chance meeting with Bram in real life changes everything for the pair however measures are in place to keep Eve from having contact with those outside the dome and certain people are determined to keep them apart.

Before I tell you my thoughts about the book I must discuss the cover as it more than deserves a line or two. I have the hardback version which has the most stunning black and gold sparkly dust jacket that is wonderfully eye catching. Underneath the dust jacket the cover is equally beautiful with an intricate gold maze set against a white background.  A female figure is at the entrance at the top and a male figure at the exit at the bottom and the symbol in the middle is the one created to symbolise Eve in the story. It’s one of the most beautiful covers I have seen in a long time. 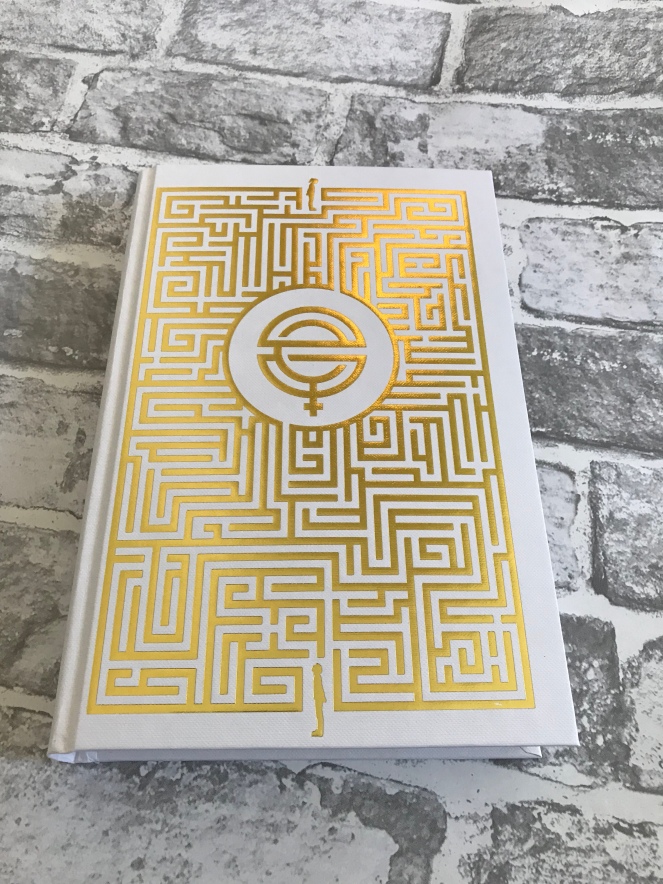 So, onto my thoughts….. The story is told from two points of view, Eve and Bram, whose worlds have such different views. Eve is cocooned in a ‘perfect’ life which Bram helps to maintain in his role as Holly despite knowing the truth about the world outside. I feel I was able to piece together a detailed picture of the history of the pair as the book progressed using the two viewpoints. The writing is fantastically descriptive throughout which really allowed me to vividly envisage the scenes the Fletcher’s have created.

For me Eve Of Man surpassed even the high expectations I had. It’s filled with action and unexpected twists at every turn. It had me gripped from page one and the writing style ensured it was a fast-paced, white-knuckle ride until its dramatic climax. The plot of this book is so unique and, in my opinion, extremely well executed with the combination of Giovanna’s romantic writing experience mixed perfectly with Tom’s sci-fi/futuristic input working extremely well together. Of course, being part of a trilogy, it ended abruptly on a massive cliff-hanger leaving me dangling until the next instalment! I can’t wait until the next book is released as there is so much more I need to discover about the past and I’m sure there are plenty more twists and turns to come.

I don’t think any review could truly do this book justice without spilling all the beans, so you will have to read it yourself to discover its secrets. The best way I could sum it up to Mr F is it’s like The Truman Show meets The Hunger Games.

Eve Of Man is a available to purchase from Amazon