When it comes to reading I don’t really have a genre per se, I just read books that I think sound intriguing from their synopsis and when I read this one I knew I simply HAD to read it! Many thanks to Jamie-Lee Nardone from Quirk and author Ashley Poston for allowing me to read and review this book – plus a massive thanks for the cute swag bag too! I hope you enjoy reading all about The Princess and the Fangirl!

Imogen Lovelace is an ordinary fangirl on an impossible mission: save her favourite character, Princess Amara, from being killed off from her favourite franchise, Starfield. The problem is, Jessica Stone—the actress who plays Princess Amara—wants nothing more than to leave the intense scrutiny of the fandom behind. If this year’s ExcelsiCon isn’t her last, she’ll consider her career derailed.

When a case of mistaken identity throws look-a-likes Imogen and Jess together, they quickly become enemies. But when the script for the Starfield sequel leaks, and all signs point to Jess, she and Imogen must trade places to find the person responsible. That’s easier said than done when the girls step into each other’s shoes and discover new romantic possibilities, as well as the other side of intense fandom. As these “princesses” race to find the script-leaker, they must rescue themselves from their own expectations, and redefine what it means to live happily ever after.

Jessica Stone is the teen star of sci-fi film Starfield and is exhausted from the constant round of promotional obligations and relentless media attention she is attracting. She wants nothing more than to leave the world of Starfield and character Princess Amara behind to concentrate on more serious acting roles, but plenty of fans have taken the death of their star badly and are pushing for Jess to reprise the role.

Heading the #SaveAmara campaign is Imogen Lovelace whose life revolves round her favourite show, Starfield. As both Jess and Imogen head to the yearly Excelsicon event their perspectives and enthusiasm are polar opposites, however a case of mistaken identity changes everything. With Jess’s abandoned script stolen and the thief leaking sections on the internet she need Imogen’s help to find the culprit away from the glare of the paparazzi ,so the pair trade places, experiencing the highs and lows of each other’s lives.

The Princess and The Fangirl is the second book in Ashley Poston’s Once Upon A Con Series and is written as a modern (geeky) retelling of the classic story The Prince and The Pauper. Told using alternate perspectives from the female protagonists, the story is set over one weekend at the Excelsicon event. The pair certainly come from different places in terms of the way they view fandom and the hype that is all part and parcel of the con world and Poston has created a perfectly written tale to enable them to make that all important thought-shift to see things from the other perspective. 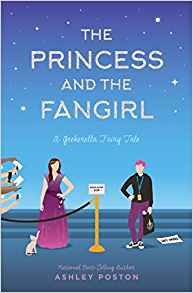 The story focuses quite heavily on the downfalls of celebrity and fandom, exposing the toxic side those thrust into the spotlight must endure. This is a subject I haven’t seen as thoroughly explored in any other book I have read and it’s great to see Poston highlighting such a damaging everyday occurrence that simply should not be happening anywhere. Sadly IRL trolls and hate are a negative aspect of the modern world we now live in, but this story serves to highlight the people behind the screens and the impact those online words can have.

Another thing that this book has executed particularly well is offer a real feel of diversity with numerous LGBT characters and relationships featured. There are also a host of BAME characters, both of which offer a true representation of the world we live in and is something many other books lack.

, the first book in the series, and whilst The Princess and The Fangirl can be read as a stand-alone I did feel a little lost with some of the references made linking to the first book. I also hadn’t anticipated the vast number of geek culture references that are used, some of which I’m happy to admit went right over my head! For this reason I feel I didn’t enjoy the book as much as I could have if I had the full fandom/geek bug.  For me The Princess and The Fangirl was a fun read with a little romance thrown into the mix alongside the geekiness. I definitely want to read Geekerella now to try and fill in the missing pieces of the puzzle and I’ve added it to my TBR list. The Princess and The Fangirl is a perfect contemporary YA fiction ideal for any Fangirl’s or boys out there especially those with a particular interest in sci-fi.

Ashley Poston is the author of Geekerella*

(Balzer & Bray 2018). A self-described nerdigan, who will one day plot the Starship Enterprise, Ashley works as a designer by day and fights evil by moonlight. She lives in South Carolina (IRL) and you can find her online at the Ashley Poston Website.

The Princess and the Fangirl is available to purchase from Amazon*

**We were gifted a copy of this book in return for an honest review. All thoughts and opinions are our own.

2 thoughts on “Book Review: The Princess and The Fangirl by Ashley Poston”