Earlier this year I picked up Dear Martin from my library after seeing some of my favourite bloggers and Youtubers recommending it and I really enjoyed it, with it’s hard hitting look at racism and police brutality really impacting me. I was therefore thrilled to be given the opportunity to read it’s newly released companion novel Dear Justyce and I’m sharing my full review of Nic Stone’s new book today. Thanks to Netgalley for sending me a copy for review.

Through a series of flashbacks and letters to Justyce, Quan’s story takes form. Troubles at home and misunderstandings at school give rise to police encounters and tough decisions. But then there’s a dead cop and a weapon with Quan’s prints on it. What leads a bright kid down a road to a murder charge? Not even Quan is sure.. 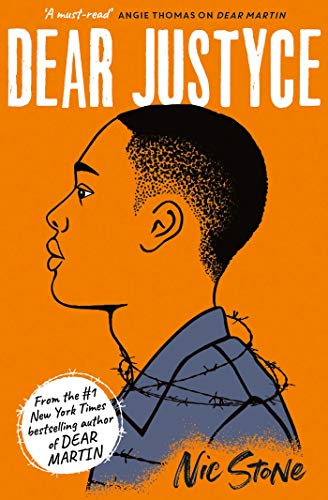 A police officer is shot dead and now teenager Quan is behind bars awaiting trial for his murder. This isn’t the way Quan hoped his life would pan out, but circumstance lead him down the wrong path and now he must atone for his past.

Once a bright, talented student Quan fostered hope of making something of his life, avoiding the path his own Father took, leading directly to jail. A troubled childhood, poverty and lack of opportunity and belief from others lead him to seek solace and support in the wrong places. Finding himself immersed in gang life and a downward vicious cycle Quan is in over his head with no way out. Now in Juvenile prison accused of murder Quan writes letters to a Justyce, his murdered cousins friend from home, to tell his story from the beginning.

Justyce is one of the lucky ones from Quan’s run down neighbourhood having been afforded opportunities that many could only dream of. Now studying Law at Yale Justyce reads the story of Quan’s life, able to build a picture of the abuse, poverty, trauma, inequality and discrimination he has faced at every turn, but it soon becomes clear his arrest and subsequent charges aren’t quite what they seem. Can Justyce help discover the truth and even if he can will Quan have the strength to break free from the hold his gang still have over him?

This is a story that MUST to be told and one which everyone would benefit from reading. Whilst Quan’s story is fictional the circumstances which lead to him straying from the correct path and ultimately being imprisoned are not. Nic Stone’s authors note explains the depth of research she undertook to ensure the authenticity of this story as well as using her own first hand experiences. It’s clear from reading her authors note how common place these situations are and it’s truly heart-breaking.

It was eye opening for me to read about the experiences Quan as a young boy had to endure from his Father’s distressing arrest to his Mother’s domestic violence at the hands of his Step-Father, which helped set the stage for the decisions he made and opportunities he lacked going into his teenage years. It’s a pattern that sadly is common in so many poor African American communities in America and this book drags these issues out into the open, shining a light on them and rightly so. It highlights so many issues including discrimination and systematic racism which all make it nigh on impossible for children from those backgrounds to succeed; such an important conversation which should be happening much more than it is.

Dear Justyce is written using interspersed letters and flashbacks which all form part of the tapestry of Quan’s life, all slotting together as you glean more information about his life. It’s such a fast paced story despite the detail and depth of emotion within.  I loved this beautifully written book and would highly recommend everyone reads to help educated themselves on these ongoing issues. Whilst this book is the companion to Dear Martin I don’t think it’s necessary to have read it in order to understand Dear Justyce, although it did give me a better personal insight into where Justyce was coming from having read his story.

This is a hard hitting story that had me hooked throughout, reading it in only a matter of days. Whilst hard to read in places it’s sadly a fictionalised portrayal of events and situations that happen every day in real life, making it all the more poignant. A highly recommended five star read from me .

Nic Stone is an Atlanta native and a Spelman College graduate. After working extensively in teen mentoring and living in Israel for several years, she returned to the United States to write full-time. Nic’s debut novel for young adults, Dear Martin, was a New York Times bestseller and William C. Morris Award finalist. She is also the author of the teen titles Odd One Out, a novel about discovering oneself and who it is okay to love, which was an NPR Best Book of the Year and a Rainbow Book List Top Ten selection, and Jackpot, a love-ish story that takes a searing look at economic inequality.

Dear Justyce is available to purchase now from Amazon*