I really enjoy reading Blogger Tag’s and finding out more about the people behind the blogs I follow. Recently I have seen two of my favourite bloggers, Jenny and Jess complete the First Time tag and I enjoyed reading their answers so much it inspired me to give it a go. So here are my answers I hope you enjoy reading them!

First app you check when you wake up in the morning?

As soon as my eyes open my hand automatically reaches for my phone, it’s like a reflex nowadays and I’m not quite sure when or how it started. The first app I check usually depends on the notifications waiting for me as I always plump for the one that looks most interesting!

**Touches wood** I have never broken a bone, although when I was younger I always wanted to break my right hand so that I could use my left hand when writing – I even used to practice my left-handed writing for when the time came!

First foreign country you ever visited?

As a child we only ever went on UK holiday’s so the first time I went abroad was to Zante, Greece with a group of friends after I had finished my A-Levels. The typical boozy girls’ holiday to mark the end of our school life and boy was it fun!

I think my first proper item of make-up was a Rimmel lipstick in the shade Heather Shimmer. It didn’t suit me at all, but for some reason back in the 90’s girl of my age group was wearing it and it seemed like a good idea, the photos tell a different story.

My first ever tape or CD?

Erm….I may be showing my age a little here but my first music was on vinyl and was the single of Karma Chameleon by Culture Club. The first tape I remember owning was a compilation that my Mum got free collecting tokens at the Esso petrol station – the first song on it was Eternal Flame by the Bangles which I loved.

My first car was a white Nova! I thought it was really cool but looking at it now it was clapped out and rusty!

Mike Myers! No, not the one out of the Halloween movies, but the one that played the lead role in Wayne’s World. Once I had seen that film I had fallen head over heels in love and even to this day he is my biggest celeb crush, I even had a t-shirt with his picture on the front!

The only thing I remember cooking when I was little are fairy cakes with my Mum. The best part being getting to lick the whisk and sneakily eating the glace cherries from the tub.

My first ever boyfriend/girlfriend?

My first ‘boyfriend’ was a boy who lived around the corner from me. We were only about 7 and I don’t even think we held hands more than once! LOL.

My first ever mobile phone?

Goodness I can’t remember the model, but it was when pay as you go phones first came out and I was still fairly young when I received one as a gift. I loved it and felt very grown up – I spent a lot of time pretending I was Cher from Clueless in my bedroom! I didn’t even know anyone else with a mobile, not even my parents so I had no one to ring or text!

As a child I always has a massive fear that my house would set on fire and I would be trapped inside. No idea where the fear came from, but I grew out of it as I got older.

The first thing I did when I got the internet was to register with Ebay and start shopping!

My first ever job was working in the chippy after school and at weekends. I got paid about £2 an hour, but I absolutely loved it. Best part of all was I got free food after my shift finished.

It’s sad to say I can only speak English with a few random French and Spanish words added in for good measure. I would love to learn another language fluently, but it was never my forte at school.

Like most primary school children, the first instrument I learnt was the recorder – I can still play a mean London’s Burning if you have a recorder to hand?

I also learnt the E Flat Brass Horn at school with regular lessons and attended a band camp one Summer – something that always makes me chuckle when I watch American Pie. I sucked big time at playing my instrument and at the camp I was completely out of my depth so spent most of the week pretending to blow my horn along with everyone else.

My first pet was our family dog Fiver. I absolutely adored him and grew up alongside him. One day he escaped the garden and my Mum told me he couldn’t be found, to this day I’m not even sure if this is true or if he was run over and she didn’t have the heart to tell me.

My first piercing and when did I get it?

My ears were the first thing I had pierced when I was about 7 and I think I was only allowed then as my Mum was sick of me begging.

I went on to have my nose pierced at a really dodgy place in town when I was only 13 and dressed in my school uniform! My Mum went crazy when I arrived home and despite loving it for a few months I decided I didn’t want it anymore and took it out.

I don’t have any tattoo’s, but I really want to get the quote “You only getone life. It’s actually your duty to live it as fully as possible “ from the book Me Before You by JoJo Moyes somewhere on my body. I just have to pluck up the courage first – it can’t be any worse than labour can it?

I was given a bear when I was born which is claret and sky blue in colour whom my parents named Trevor in honour of West Ham player Trevor Brooking. I still have him even though he is a little worse for wear as he is extremely well-loved.

Like most morning’s my first thought was….Leo it’s too early to get up, go back to bed!

My first time on a ship?

I used to go on a little ferry with my Grandparents as a child but the first proper boat I went on was a DFDS boat to Amsterdam for Mr F’s 30th Birthday. 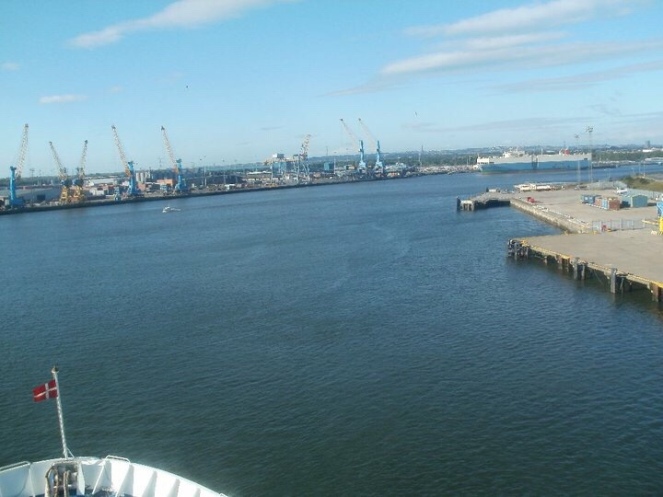 The first book I remember reading?

The first book I have a memory of reading is Geraldine’s Blanket. It was one of my favourites and I have passed it down to all my children, my original copy is still on our bookshelf now. Having googled it I discovered it’s still available to buy now on Amazon*

The first concert I ever attended?

When I was young my Dad took me to see New Kids On The Block at the old Wembley. We were right at the back and they looked like ants! I think with hindsight I was probably a bit young to enjoy it as it was rather loud and overwhelming.

Years later I went to a local concert and saw PJ & Duncan aka Ant & Dec, alongside a host of other 90’s acts. I got to meet them backstage and Dec gave me a piece of Wrigleys gum which of course I treasured only to discover it stinking and mouldy in my attic years later!!!

The first film I remember seeing?

The first film I remember watching was Grease which quickly became my favourite – I wore out two video tapes from over use! Watching it again as an adult I couldn’t believe how inappropriate it was, thankfully it had all gone over my head as a child.

The first person I talked to today?

Leo, I told him to get into my bed for a snuggle as it was too early.

The first text I sent today?

The only text I have sent today was to ask Thing 1 what she wanted for lunch.

The first thing I do every morning?

The first thing I do when I get home?

The first thing I do as soon as I get home is take my shoes off, I can’t stand being in the house with them on.

The first time you ever got drunk?

I used to hang out with the older lad who lived next door and one evening he suggested going to the pub with some of his mates. Previously I had been allowed the odd sip of wine at Christmas and if I’m honest didn’t really like it so was going to stick to soft drinks. That was until one of his friends introduced me to Peach Schnapps and lemonade which just tasted like pop and believe me I think I drank enough to sink a ship that night!

I really enjoyed answering these questions as they made me have to really think about my past and  in some cases take a trip down memory lane. I hope you enjoyed reading them as much as I enjoyed completing the tag. I would love to hear about some of your ‘firsts’ so leave me a comment below.